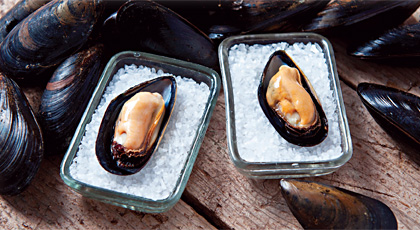 The clean, crisp, and cold waters of the Labrador Current flow from the Arctic icebergs to the shores of Newfoundland. It is in these waters that Badger Bay Mussel Farms Ltd. grow their signature Iceberg SelectTM mussels, some of the finest mussels in the world.

Badger Bay Mussel Farms has double reason to celebrate in 2013. It is the company’s 25th anniversary and they have also achieved organic aquaculture certification in February 2013. Newfoundland’s newly gained organic status certification is a first for mussel farming in North America.

The Iceberg Select brand is the creation of Juan Roberts, president and founder of Badger Bay Mussel Farms in Triton, Newfoundland. These blue mussels (Mytilus edulis) are farmed along the northeastern coast of Newfoundland. Badger Bay Mussel Farms is a rapidly growing company and sells over 5 million pounds of mussels annually. Fresh Iceberg Select mussels are exported as far as Alberta and the eastern United States. Frozen mussels are also exported to Asia.

But Iceberg Select mussels are not your run of the-mill mussels. They are unique for several reasons. “The environment affects taste in mussels,” explains Roberts. “The clean, cold [Labrador Current] water gives them a sweeter taste. I guess the word I would use is succulent.” Roberts chose the name Iceberg Select because the Labrador Current is inundated with the water from melting icebergs. Over 2,000 icebergs pass the northern point of Labrador each year. The waters are on average 7-10°C colder than other coastal waters at similar latitudes, stimulating flavour and meat quality. 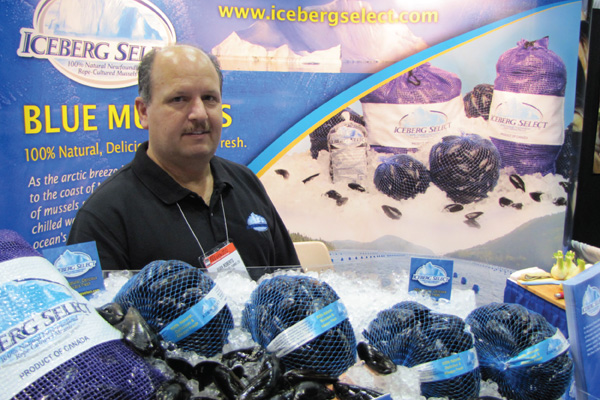 Maintaining organic status requires annual audits and re-certification by an independent third party in order to ensure standards are maintained. All stages of farming and processing must be documented and traceable. Materials used are also examined.

In the process of honing his farming techniques, Roberts travelled to New Zealand to learn new methods for increasing productivity. New Zealand is considered a world leader in producing environmentally sustainable mussels. It was there that Roberts learned ‘continuous socking’ technology. Badger Bay Mussel Farms was the first to use this sustainable and efficient method in Newfoundland.

Mussel spat (larval seed) are caught on a collector rope (line) and are then stripped off and transferred to a second rope. This second rope, with spat applied to it, is then covered by a continuous socking, which covers the rope and spat like a sleeve. The Continuous Socking method uses one long rope (the second rope) that is placed in the water in loops at a length and depth that is determined by the grower and the conditions.

The socking is made of a bio-degradable cotton material that dissolves within 1-2 months, leaving no waste. During those first couple months, the spat grows to a size where it can attach to the rope and the socking becomes unnecessary. The continuous socking method is quicker and less labour intensive. The socking also retains more spat leading to fuller harvests.

Using bio-degradable materials during production is just one example of the extensive certification requirements. Farmers must also show that no synthetic chemicals or pesticide, have minimized waste, have considered local habitat health, and continuous movement toward improvement. Achieving organic certification is a major undertaking, but Roberts states with conviction that “It’s the right way to go”.

Organic foods are good for human health and environmental health. But are also for markets. Consumers are increasingly demanding organic foods and high quality foods. “[Our organic certification] will allow people to choose this option if it’s important to them. It’s a healthy food and a premium product,” says Roberts. The newly-labelled organic Iceberg Select mussels were launched at this year’s Boston Seafood show.

Activity on the Badger Bay Mussel Farms runs year-round. Seeding of the lines takes place over the summer, while harvesting and maintenance continues 52 weeks of the year. The mid-winter months are not easy, the water will freeze without periodic breaking using fibreglass boats. The important task of maintenance also occurs year-round, particularly of the lines. “The trick is constant maintenance,” explains Roberts. “If you’re going to do it right, you need someone out there all the time.”

This is where Badger Bay Mussel Farms finds itself on its 25th anniversary. The milestone is not just a measure of time, it highlights just how much the company has grown. Badger Bay Mussel Farms was founded in 1988 by a 21-year-old Roberts with just the help of his wife, Sherrie, who is co-owner, his father, and one employee. Today, Badger Bay Mussel Farms along with its sister company Notre Dame, employs 20 individuals, 25 more are employed at the Allen’s Fisheries processing plant.

And Badger Bay Mussel Farms continues to grow. “The company has changed a lot in the past 12-18 months,” says Roberts. “We have 19 farms now and 900 hectares of water. We are applying… to get rights to more water. The processing plant and farming equipment all have state of the art in technology.”

Badger Bay Mussel Farms owns and operates their own farms, but also purchases mussels from two other Newfoundland growers. These mussels and those produced by Notre Dame Mussel Farms are sold under the Iceberg Select brand.

With the purchase of the new farms, Badger Bay Mussel Farms is set up for 2-5 years of expansion. “The next step is to start farming, but you can’t rush into it”. He explains that sites need to be cleaned and upgraded so that they can start on the right foot.

Part of the expansion planned for the next few years is to launch a new website promoting their organic status, projected to go online in fall 2013. Increased productivity also means creating more jobs and being able to turn part-time jobs into full-time jobs.

But Roberts does not plan to stop there. Six years ago, Badger Bay Mussel Farms began experimenting with growing oysters as well. Oysters have a 3-5 year growth time, but Roberts is not deterred. He has brought on a biologist to help out with growing techniques and best practices for oysters. “We have 300- 400 hectares of water for oysters. The potential is huge.”

Favourable water conditions, meticulous year-round maintenance, and organic farming and processing methods combine to produce a premium seafood product. Judging by increasing sales, it seems that the mussels have spoken for themselves.  RQ 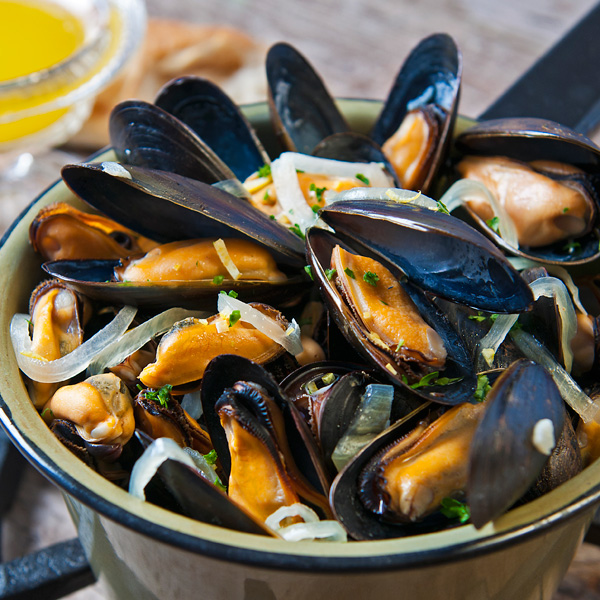